Home » After GST & RERA, Investing in real estate, will be Deal of Loss – Know the reasons 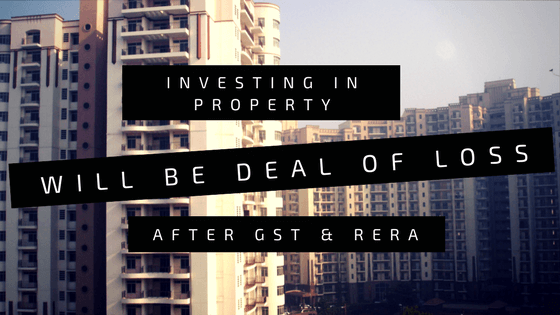 After GST & RERA, Investing in real estate, will be Deal of Loss – Know the reasons

If you are planning to buy a house or a flat even after the Goods and Services Tax and rera Laws implemented from July 1, then it will be a loss deal. Even if the home loan rate is low and property prices are low, it will not get any benefit.
According to the report of the property consultant Knight Frank, property prices have fallen drastically in eight major real estate markets, except after Delhi-NCR and Kolkata, after the ban was imposed.

According to the report, the rates in Delhi NCR have dropped significantly since 2014, but still, the builders are still unable to complete their old projects. Because of this, many builders are coming out with new-new schemes, so invest more in their projects, thereby keeping cash flows in place.

However, there is still no excitement by people taking projects, as it was before demonetization. After the GST, the government has already made up and implemented 12% GST on new projects.

Good time for will come in two to three years

According to the report, 1.8 lakh apartments alone in Delhi NCR are lying unsold. It is taking more than 8 years for a builder to sell a flat. It is not expected to be good at the moment, and it will take 2-3 years.

Prices are still rising in these cities

According to the report, there are cities in the country where the prices of property have increased rapidly. These cities include Hyderabad, Mumbai, Bangalore, Chennai, Ahmadabad, Pune. In Hyderabad alone, where the rate was 3390 in 2014, it has reached 3710 in the first six months of 2017.