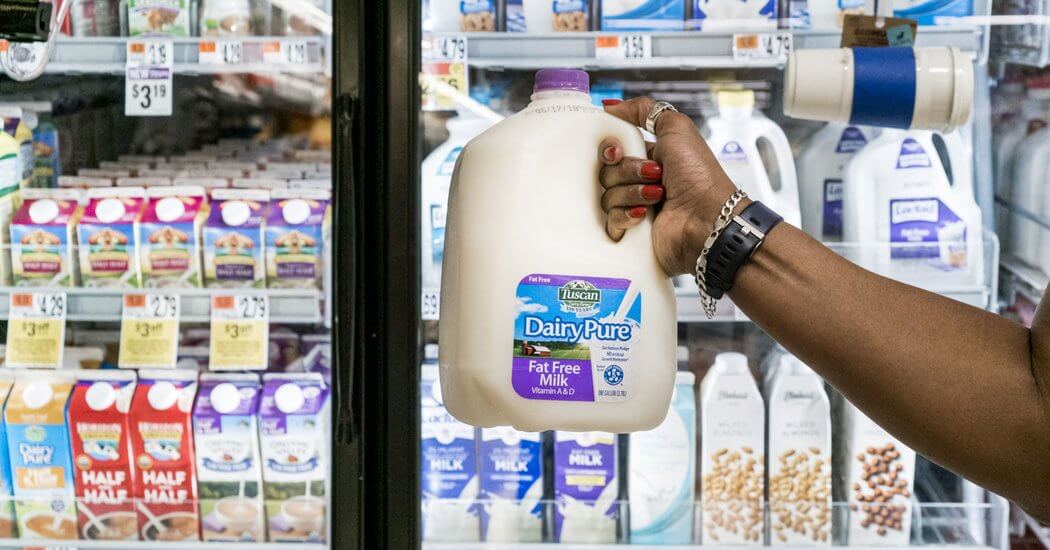 Top 11 milk brands in the USA

Nutritionists categorically state that milk is the most essential staple food and forms a valuable part in a balanced diet. This is so because it is rich in vital nutrients including calcium.  The milk consumption has in the USA has shown a downward trend and the milk industry is under pressure. According to a statistics children consumed lion’s share of milk followed by teenagers and adults. The behavior of the consumer has high regard for

Based on popularity semi-skimmed milk contributes towards 63% of milk sales. Whole milk sale stands at 27% and skimmed with 6% consumption. Some of the leading brands of milk in the USA is cited below.

Horizon packs organic milk with DHA omega-3 in Maryland which is procured almost 99% of it from 700 dairies of 23 states.   DHA Omega-3 is good for brain, heart and eyes. The dairy started its work from 1991.  It is the largest supplier in North America and Europe. The sale outlet is supermarkets and grocery stores. The variety in organic milk is as follows;-

This milk has an absence of antibiotics and pesticides. The opened pack keeps fresh up to seven days. It is the best brand globally. It has dominance over its competitors for several years.

Wegmans the supermarket chain is also renowned for milk and dairy product in England and America. The milk is pasteurized and fresh organic milk. It is approved by the USA Department of Agriculture. It holds a prestigious second position in the milk sector. The chain was established in 1916.  The cows are not injected by artificial growth hormones and antibiotics.  The brand has existed for more than 35 years.

The organic milk varieties come in half and whole gallon sizes it is as follows;-

It takes minimum of three years for a dairy farm to get a certification of being organic. The headquarters is in New York.

The dairy came into existence in 1846 by Harvey Perley Hood.  It distributed milk and cultured foods. At present it’s headquartered is in Massachusetts. The company has expanded its sphere of activities from New England to the United States. The company purchases milk from farmers of Massachusetts and New York.  They are members of the co-ops. The milk is tested for contamination and adulteration. Then it goes to the plant.

The company is renowned for its milk.  This popular milk is sold in the market in different varieties.  Hood milk is among the top three brands of milk in the USA. The milk has health benefits and nutrition value.

Northwest Dairy Association is trading as Darigold Inc was founded in 1918.  It is an American marketing cooperative formed by 500 dairy families from Idaho, Montana, Oregon and Washington.  It is the 17th largest cooperative. The cooperative has fastidious standards for quality, freshness and flavor.  The ultra-pasteurization gives the milk a long shelf life without deteriorating the nutrition as well as taste.  The company takes care of 10 billion pounds of milk annually.

The company headquartered in Seattle Washington.  Darigold Inc. functions through 11 plants throughout Northwest producing organic label milk and grass-fed milk.  According to the milk volume, the cooperative is at present the sixth-largest regional dairy functionary.  The annual sale touches $2 billion through the sale of eight billion pounds of milk every year. The non-fat skim milk powder is utilized in infant formulas.

The inception of this organization began in 1922 by W T McClelland and his wife by rearing 20 cows. It is the largest family-owned functional dairy. There are 10,000 traditional and organic milking cows on the farm. This dairy company is in Phoenix, Arizona. Roxie cow is the mascot of the company. If you inquire in Southwest regarding Mmmmilk they will vouch for its quality.

The cows are reared with quality nutritious food, comfortable living conditions and care. The growth hormone rBST is not given to the cows.  The variety of milk includes;-

The farm makes the milk go through ultra-pasteurization for extended shelf life or ESL.  Once the seal of the product is removed it can be consumed within seven days.

Safeway Inc. was established in 1915 by Marion Barton Skaggs. It is a supermarket chain spread across the country with 1300 stores. It’s headquarters at California.  Its presence also exists in Canada United States Germany and Australia. The company employs 250,000 personnel. In the organic milk farm sector, it has a high ranking among consumers. At present, it is ranked sixth in America.

The different dairy products are;-

The company does a brisk business in food and beverage with headquarter at Dallas Texas. It also milk farms with full-line dairy products is acclaimed. It is positioned at the seventh position based on sales.  The company processes milk in states under several regional and national brands.

The company has come a long way since its inception in 1925. The country boasts of 100 stores.  The milk is supplied to 35 states and France, and the United Kingdom.  The company’s founder was Samuel E. Dean Sr.  In 2020 Dean Foods was taken over by Dairy Farmers of America. In 2019 the company announced its bankruptcy reasoning the going down of consumption in cow’s milk because of growth in demand of plant milk.

The company came into existence in 1988.  Its headquarters in Wisconsin. The dairy produces a good range of dairy products.  It is the nation’s biggest farmer-owned organic cooperative. The company claims that their happy cows graze in green pastures which nourishes them and they give milk which has more omega-3.  Moreover, the cows are not given antibiotics, synthetic hormones and toxic pesticides. It is USDA organic certified.

At present, the company is a group of 158 farmers-owned in New York and 205 in Pennsylvania for organic milk production. The milk is a good choice for babies, children, teenagers and adults. The organic valley stands on number eighth among milk brands in America. It caters to the needs of 28 other countries.

This company began its business in 1945 with cheese outlets and gradually made its place in dairy products.  It exists among the top ten. Schreiber is 8,500 employee-owned dairy company with headquarter at Green Bay, Wisconsin.

It has 12 production facilities in eight states of the States. The company does business globally covering Europe, Mexico, South America and India. The company collects milk as raw material and makes everything from it.  Its top-quality milk is notable for good taste which is neither very sweet nor tasteless. Schreiber sells safe and hygienic food to clients for an enriched healthy life.

The company began its operations in 1857. It was established by Gail Borden Jr. This company did the pioneering work of glass milk bottles.  The company headquarter is in Texas. Twelve dairy milk processing plants supply milk to 100 branches scattered all over the USA.   This company developed the method of condensing milk.  The creamy milk and dairy products are relished by young and old.

The Borden Dairy started in the 2000s with headquarters at Dallas.  It has 12 plants and almost 100 distribution centers located at Midwest, Southern eastern regions of the States.  They supply a whole range of milk.

This company came into existence in 1987 with headquarters at Texas. The milk produced by the company is creamy and extra rich in protein and calcium.  The protein value is up by 15-18% and calcium 15-20%. They cater to the demands of the market by producing different flavor milk, whole milk and reduced-fat milk.  The company boasts of Jersey cows that produce tasty milk.  The company has started attractive bottle packages.

The cows are not fed on artificial hormones like rBSt and rGBH and antibiotics. The company has added more 2,536 stores to the existing one. Among white milk, the choice offered is homogenized whole, reduced fat2%, and fat-free quality.